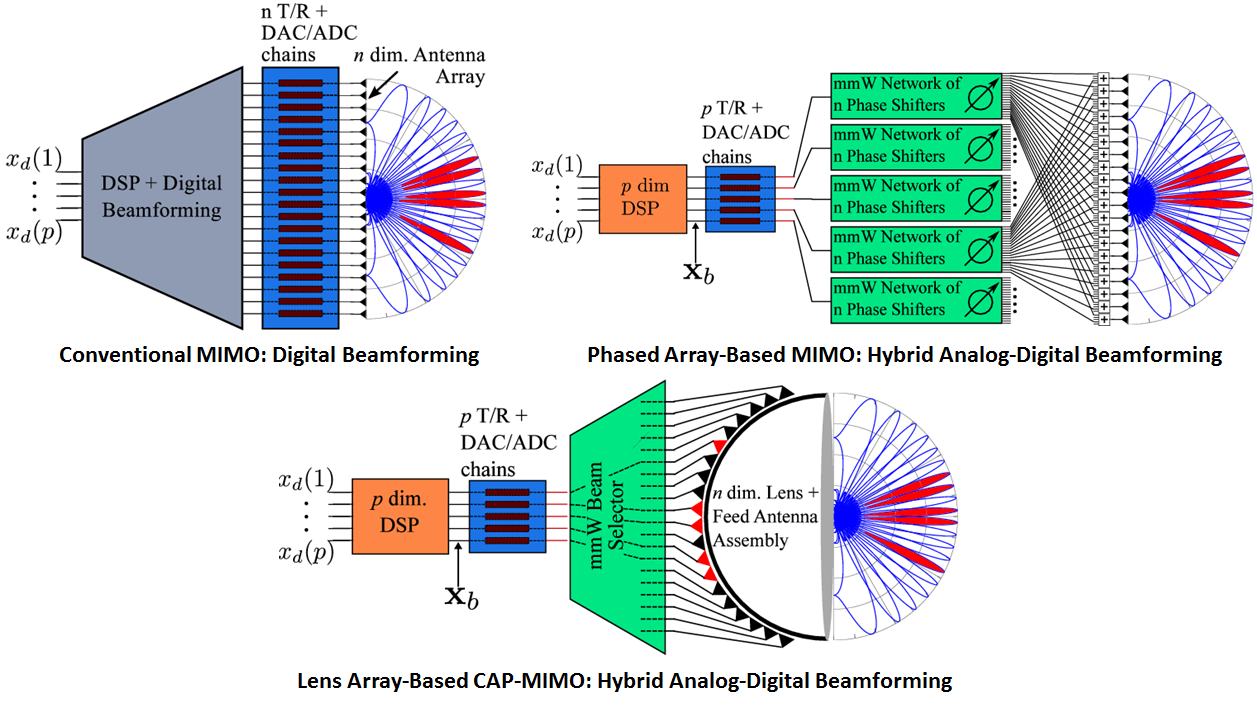 The figure above compares the three main architectures for high-dimensional MIMO communication at mm-wave frequencies. Consider an aperture corresponding to n half-wavelength spaced antennas (e.g., n = 800 for a 6″ x 6″ antenna at 28GHz). The conventional MIMO architecture based on digital beamforming suffers from prohibitively high hardware complexity – since a dedicated transmit/receive (T/R) chain (filter, amplifier, mixer, DAC/ADC) is needed for each antenna. Thus, most promising proposals are based on a hybrid analog-digital architecture determined by the number of T/R chains available, say p, corresponding to the number of independent data streams to be multiplexed. Typically p << n in practice for mm-wave systems. Most existing works, including prototypes from major companies, are based on a phased array-based architecture in which a network of n phase shifters is needed for generating each beam. Thus, generation of p beams for supporting n data streams requires a network of np phased shifters that is very challenging in practice, especially for large p. In fact, all existing prototypes are based on single-beam phased arrays with p=1 and thus cannot support spatial multiplexing with a single array. In contrast, CAP-MIMO uses a lens-array for beamforming and enables multi-beam steering and data multiplexing (MBDM) by simultaneously generating p beams and multiplexing data into them through the lens array-based front-end antenna. Different beams are generated by exciting different feed antennas. Data multiplexing into the feeds is achieved through a mm-wave beam selector which drives the complexity of the CAP-MIMO transceiver.

In general, if p=n, digital beamforming is the natural choice. If p=1, a phased array-based architecture is desirable. However, for the practically relevant cases of 1 < p < n, CAP-MIMO architecture offers the most promising choice for optimizing performance-versus-complexity tradeoffs.

Check out more information on our 28 GHz CAP-MIMO prototype